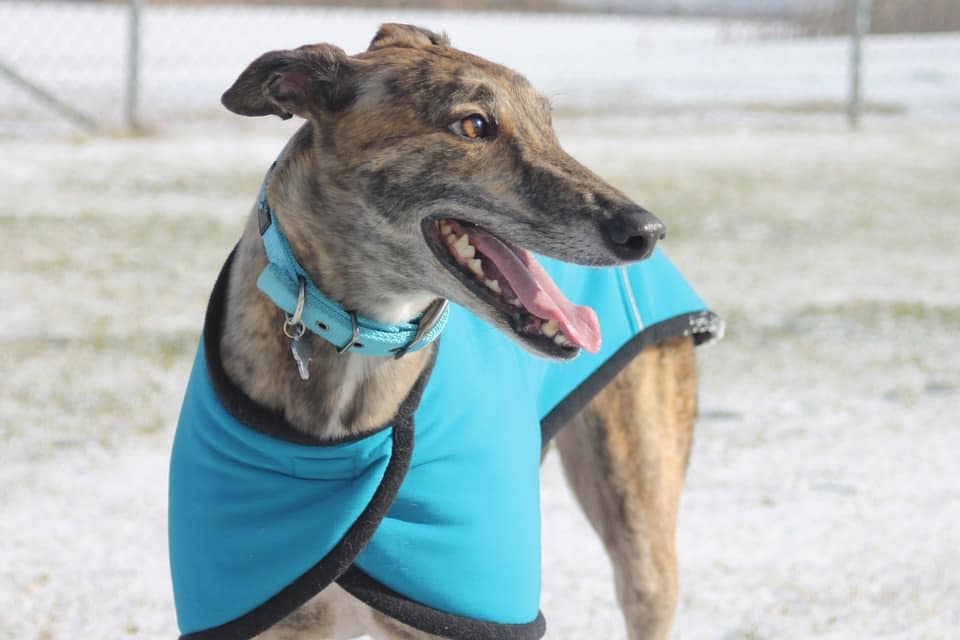 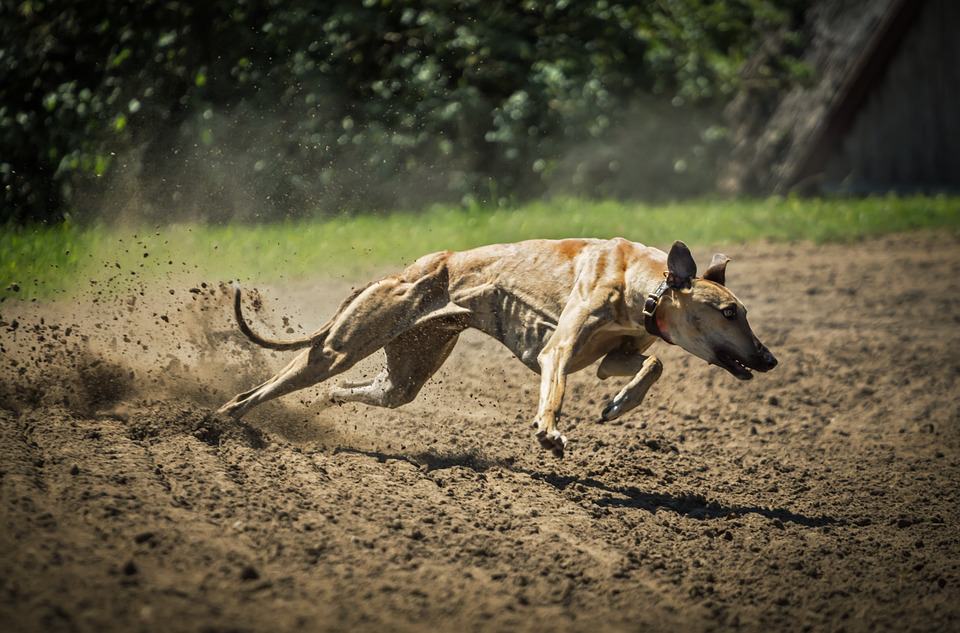 Greyhounds can reach speeds up to 45 mph

The Greyhound dog is one of the most ancient breeds known to man.  It originated in the Middle East and Northern Africa. Carvings of the Greyhound were found in the Egyptian tomb of Amten as far back as 2900 B.C.  During the Dark Ages, Greyhounds found their way into Europe. They were so prized for their hunting ability that Kings created laws preventing commoners living within 10 miles of the king’s hunting grounds from owning a Greyhound.

Historic royalty who were captivated by this breed includes Cleopatra and Queen Elizabeth I. The patronage of these two queens led to Greyhound racing being dubbed the “Sport of Queens.”  Another great enthusiast was General George Armstrong Custer, who traveled with as many as 40 Greyhounds.  It is said that he had a match race the day before he set off to his fateful death at the Little Big Horn. Rutherford B. Hayes, the 19th President of the United States, also favored the Greyhound.  His dog was named “Grim”. It is also a fact that the Greyhound is the only breed of dog mentioned in the Bible.

The breed was first brought to America by Spanish explorers and British colonists in the 1500s.  Developed for speed, the Greyhound dog had no trouble catching its natural prey including rabbits, fox, deer, coyotes and wild boar.  Their hunting ability was aided by superb eyesight hence their modern day grouping within the other sighthounds such as the Whippet, Borzoi, Afghan hound, and Saluki.

Physical Characteristics of the Greyhound Dog

Greyhounds have a short, smooth coat that’s easy to care for and comes in many different color combinations including fawn, brindle, red, white, grey, blue-grey and black. The Greyhound is a sleek, athletic dog that measures between 25 – 29 inches at the shoulder and weighs from 65 to 100 pounds.  It should be noted that females are smaller than males and racing Greyhounds are usually somewhat smaller than those bred for the show ring.

Greyhounds are considered to be the fastest dog in the world capable of reaching speeds up to 45 miles per hour. This great speed eventually them to be used for racing, a practice that still continues today. Greyhounds were also one of the first breeds to compete in dog shows.  Eighteen were entered in the Westminster Kennel Club catalog of 1877.  They were officially recognized as a breed by the American Kennel Club (AKC) in 1885.  Over the years their talents have allowed them to participate in many other sports, including lure coursing, obedience, and agility.

Today, the Greyhound dog is enjoyed as a charming, docile, yet independent companion with a friendly attitude towards people.  They are sweet and mild-natured and enjoy sleeping as much as running or chasing.  Training the Greyhound is considered to be challenging, as their prey drive has not diminished at all over the years.  Fenced yards and leash walking are a must. Cats, rabbits, and squirrels have caused many an owner to spend hours trying to retrieve their hound that took off in a frenzied chase.

Greyhounds generally have a wonderful temperament, being friendly and non-aggressive.  They can be considered to be aloof toward strangers. They are an intelligent, independent breed that also has a sensitive side. Mistreatment can cause them to become timid or shy. It is a sad reflection on man, that when age sets in or they are unsuccessful on the race track; many Greyhounds become abandoned or are simply euthanized. Greyhound rescue groups around the world do a wonderful job of seeing that these dogs find new homes.

Greyhound puppies have good temperaments. They are playful, curious and love to be held.  Temperament is usually affected by heredity, training, and socialization. When selecting a new Greyhound puppy it is best to check the temperament of the parents before choosing one of the pups. Like all new puppies, the Greyhound needs to be properly socialized as early as possible. This will go a long way towards reducing timidness and assuring that they become even-tempered, calm and gentle.

Greyhounds are predominantly healthy. Their life expectancy is considered to be around 10-12 years. The breed is prone to gastric torsion (bloat). Bloat is caused by the sudden influx of gas and air in the stomach, which causes the stomach to distend and twist and can cause death in a dog if it is not treated within a few hours.  I recommend feeding Greyhounds smaller meals more often throughout the day and keeping them calm for at least an hour after they eat. Greyhounds, as well as all sighthounds, seem to be more sensitive to anesthesia.  Most veterinarians are well aware of this; however, reminding them before any surgical procedure is a good idea.

Greyhounds are also prone to hypothyroidism which can produce weight gain, lethargy, mental dullness, eyelid drooping, irregular heat cycles in bitches, and infertility. Hypothyroidism also affects the skin and coat. The skin thickens, becomes tough and dark, while the coat gets coarse, brittle, and can begin to fall out. Hypothyroidism is easily treated today and with medication, dogs can live a long and healthy life.  It should be noted that some Greyhounds naturally have lower thyroid levels than other breeds. In this case, when none of the clinical signs of hypothyroidism are present, it is ill-advised to put them on thyroid medication.

Considered one of the large breeds, the Greyhound is subject to bone and joint problems. Hip and elbow dysplasia along with Osteosarcoma, an aggressive bone cancer, are all possibilities.  Lameness can be the first sign of any bone or joint problem; so seeing your veterinarian as soon as possible is important.

Caring for the Greyhound Dog

The correct amount and type of food you should feed a Greyhound depends primarily on the animal’s age, weight, and activity level.  Feeding for condition is what I recommend. Drbillspetnutrition.com has guidelines for monitoring a dog’s condition through observation and touch.

Remember, the Greyhound has short, smooth fur,  which makes the Greyhound more susceptible to cold weather, and they can commonly be seen shivering. A warm coat in any cold climate will be welcomed by the Greyhound!