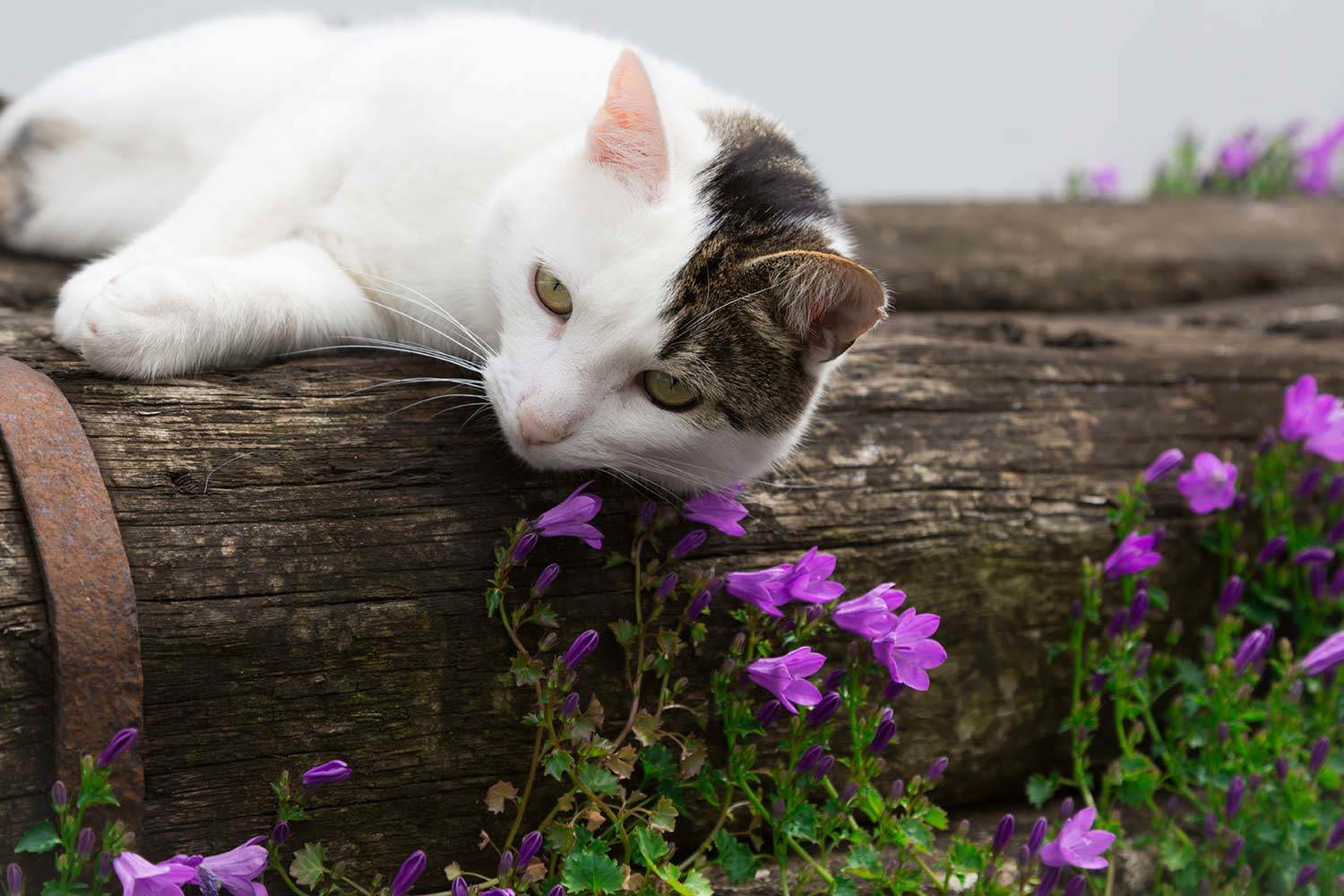 Liver disease in cats can occur in cats of any age, and it occurs when the liver is damaged. The liver is the largest internal organ of the body and is responsible for a number of metabolic, functional and detoxification processes.  It is located in the right side of the abdomen under the diaphragm. The liver is the only organ in the body that is capable of rejuvenating itself. 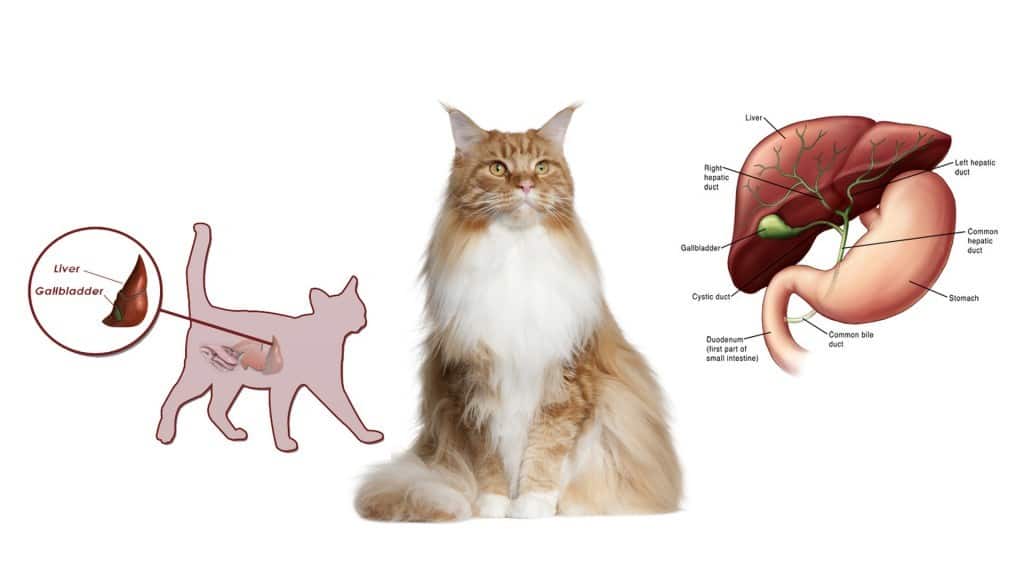 Functions of the liver include:

The liver is divided into sections (known as lobes), each of which is composed of thousands of structural and functional units (hepatic lobules). 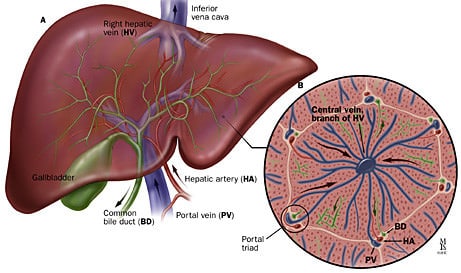 Liver disease in cats occurs when the liver is damaged, resulting in loss of function. It can be acute (sudden onset) or chronic (slow and progressive). The most common cause of liver failure in cats is idiopathic hepatic lipidosis. The next most common cause is Cholangiohepatitis. 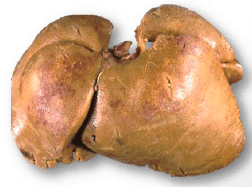 Hepatic Lipidosis is the most common type of liver disease in cats and occurs when your cat becomes anorexic (stops or reduces the amount of food he is eating), the body begins to use fat stores as fuel. These fat stores are sent to the liver, to be broken down to supply nutrients.  Unfortunately, the liver sometimes becomes overwhelmed and is unable to process this fat as quickly as necessary, leading to a build-up of fat in the liver, which interferes with normal liver function. 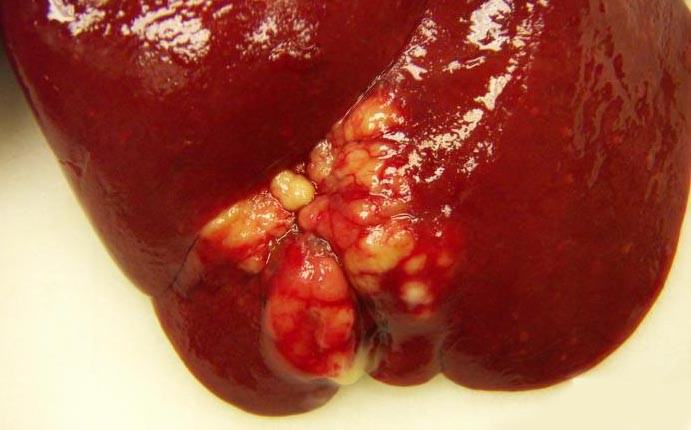 Causes of infection may often include feline infectious peritonitis (FIP), Pancreatitis, inflammatory bowel disease (IBD), bacterial infection and parasitic infection (including toxoplasmosis). Feline leukemia and cancers that spread to the liver from other locations are other causes of hepatic insufficiency.

Other Causes of Liver Damage

Toxins
Damage by toxins (Toxic Hepatopathy) is caused by exposure to drugs, toxins or the lack of blood flow to the liver.

Portosystemic Shunt (also known as liver shunt)
Portosystemic shunts are abnormal communications between the portal and systemic venous system which allows intestinal blood to be delivered to the systemic circulation prior to hepatic detoxification. A shunt means that blood bypasses the liver and is not detoxified causing a rise in toxins being delivered throughout the body. Most portosystemic shunts are congenital (known as CPSS) and cats demonstrate clinical signs within 12 months of age.

Liver disease can occur in cats of any age although in younger cats it’s most commonly caused by a portosystemic shunt or toxic hepatopathy (ingestion of toxins or drugs).

Clinical signs may vary depending on what has caused the liver disease in cats, and symptoms can often be vague and non-specific.

Early symptoms you may notice include: 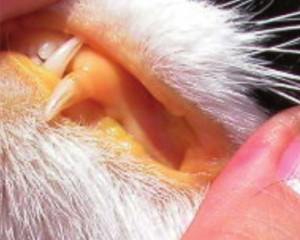 Signs of severe liver damage include:

Your veterinarian will perform a physical examination of your cat and will want to run several tests, including a biochemical profile to look at:

Other tests that may be performed include:

Treatment depends on the cause of liver disease in cats. 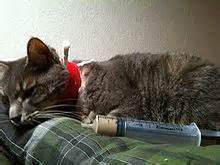 Hepatic failure, or acute liver failure, is a condition characterized by the sudden loss of 70 percent or more of the liver’s function. This diseased state may be due to sudden, massive, hepatic necrosis (tissue death in the liver).

Symptoms
Primary and secondary hepatobiliary disorders – those dealing with the liver, gallbladder, bile ducts or bile – are generally associated with variable hepatic necrosis. However, acute liver failure from severe hepatic necrosis is an uncommon phenomenon.

Acute liver failure can affect the body through a number of system failures:

Causes
Acute liver failure is most often caused by infectious agents or toxins, poor flow of fluids into the liver and surrounding tissues (perfusion), hypoxia (inability to breathe), drugs or chemicals that are destructive to the liver (hepatotoxic), and excess exposure to heat. Necrosis (tissue death) sets in, with loss of liver enzymes and impaired liver function ultimately leading to complete organ failure.

Acute liver failure also occurs due to extensive metabolic disorders in protein synthesis (albumin, transport protein, pro-coagulant and anticoagulant protein factors), and glucose absorption, as well as abnormalities in the metabolic detoxification process. If this condition is not treated promptly, it can result in death.

Hematology/biochemistry/urine analyses will test for:

Lab Tests will be used to look for:

Imaging tests will look for:

X-rays and ultrasound tests may indicate an enlarged liver, and other hepatic abnormalities, including conditions that may not be directly related to the liver.

Treatment
Hospitalization is vital for treating acute liver failure. Fluids and electrolytes, along with colloid (the gelatinous substance necessary for proper thyroid functioning) replacements and oxygen supplementation, are key aspects of treatment and care. Your cat will be placed on restricted activity in order to give the liver an opportunity to regenerate. Catheter feeding is recommended for highly unstable patients, while enteric feeding (feeding directly into the intestines) in small amounts is recommended for otherwise stable patients. A normal protein diet with supplemental vitamins E and K is advised.

The common medications used for liver failure are anti-emetics, drugs for hepatic encephalopathy (brain disease, with or without edema), hepatoprotectants (to decrease the activity of aminotransferases), coagulopathy drugs, and antioxidants. 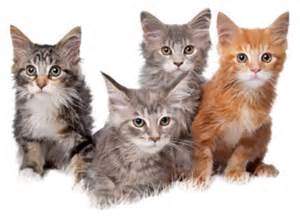 This material is provided for educational purposes only and is not intended to diagnose or treat any disease or condition. All specific treatment decisions must be made by you and your local, attending veterinarian.