Pet Health – Be on the Defense 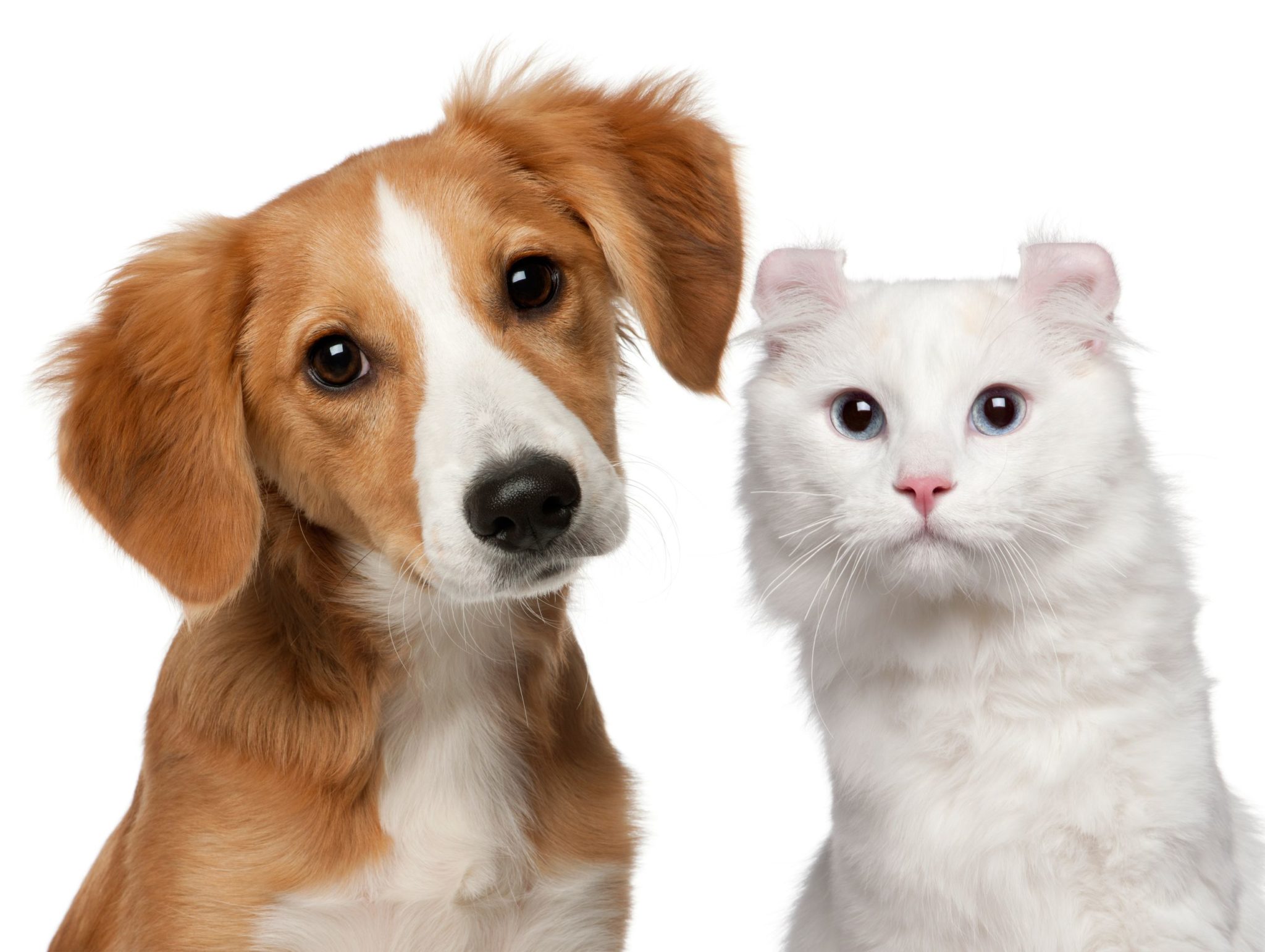 The concept of defending pet health in order to create optimum health is based on what we can do to prevent the onset of serious health issues, delay the onset of age-related diseases and extend the number of healthy years we have to enjoy our best friends.

Science tells us that one of the greatest threats to an animal’s health is Oxidative Stress. Oxidative stress is the resultant imbalance between the daily production of free radicals, also known as Reactive Oxygen Species (ROS), and the existing free radical scavenging capacity or antioxidant system capability of the dog and cat.

In order to understand what a free radical is and how it is formed a little background information is needed. Our pet’s bodies are made up of many different types of cells. Cells contain the structures that allow it to perform specific tasks vital to the health and well-being of the animal. 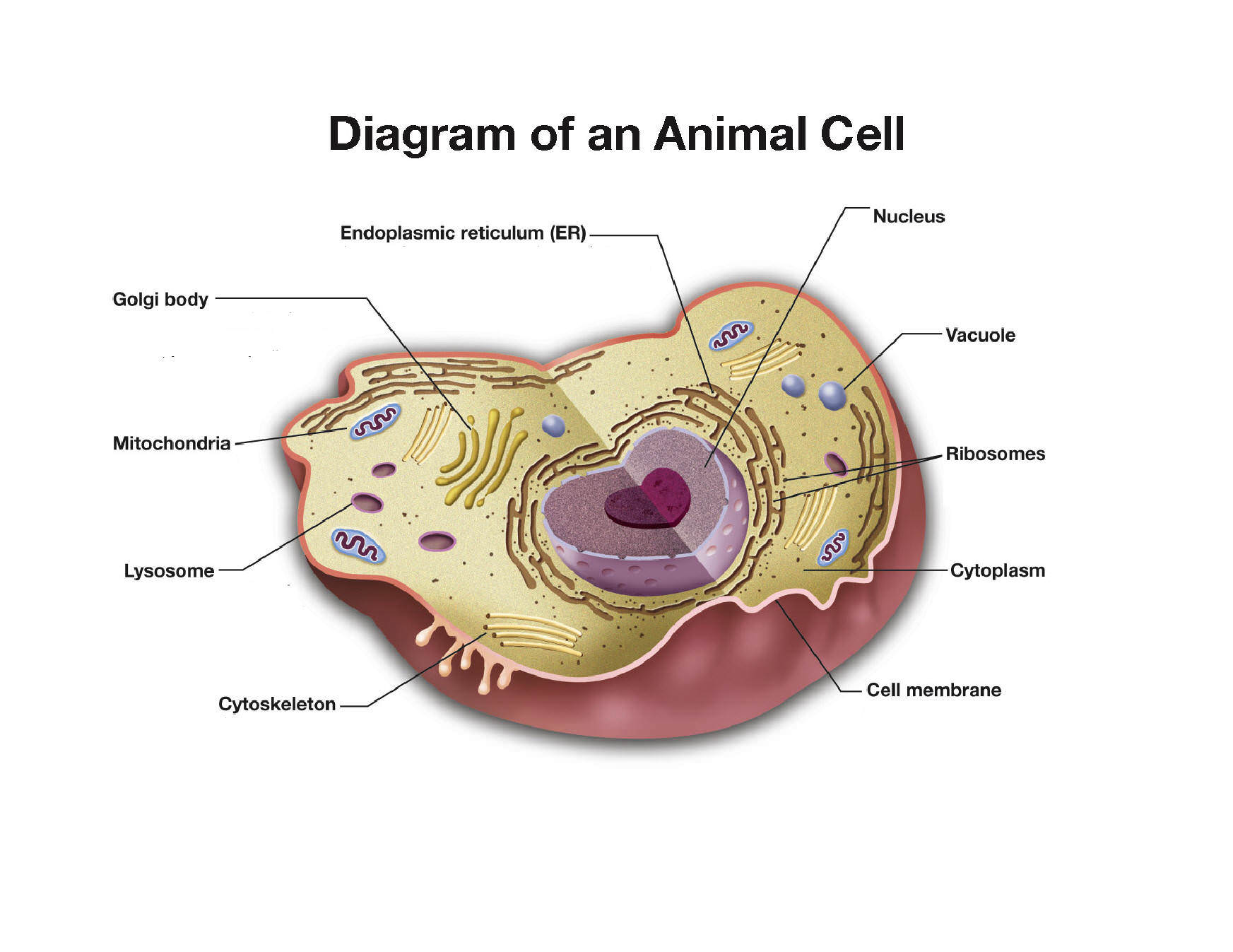 The most important structural feature of an atom that determines its chemical behavior is the number of electrons in this outer shell. Atoms want and seek stability meaning that all of its electrons are paired up. When the electrons are not paired, atoms seek stabilization by gaining or losing electrons. They also bond together with other atoms and share electrons.

Free radicals or reactive oxygen species (ROS) form when an atom loses an electron or weakly bonded atoms break apart leaving the molecule with an odd, unpaired electron. These Free radicals are very unstable creating a highly reactive molecule that will steal an electron from the first thing they encounter, such as a cell wall, a strand of DNA, cellular mitochondria or other important chemical compounds such as lipids and proteins. The resultant loss of an electron, in turn, oxidizes these cells, which makes them unstable and easily breakable.

Free radical oxidation occurs during the normal daily metabolic processes of an animal. This means that simply eating, breathing, exercise and routine cellular functioning all contribute to the production of reactive oxygen species.

Nutritional deficiencies such as feeding highly processed foods, vitamin and mineral deficiencies and over-eating produce large numbers of reactive oxygen species. Physical stresses like heavy exercise, injury, obesity and disease or psychological stressors such as fear, aggressiveness and anxiety all add to the problem.

Additionally, environmental toxins (alpha and gamma rays from sunlight, numerous air and water pollutants and pharmaceuticals of all kinds contribute to the total daily bombardment of reactive oxygen species.

The accumulation of excessive free radical damage over time is termed Oxidative Stress and is known to play a significant role in the progression of premature cell death, multiple disease entities and accelerated aging.

The damage that free radicals produce contributes to a number of harmful effects in pet heath such as: 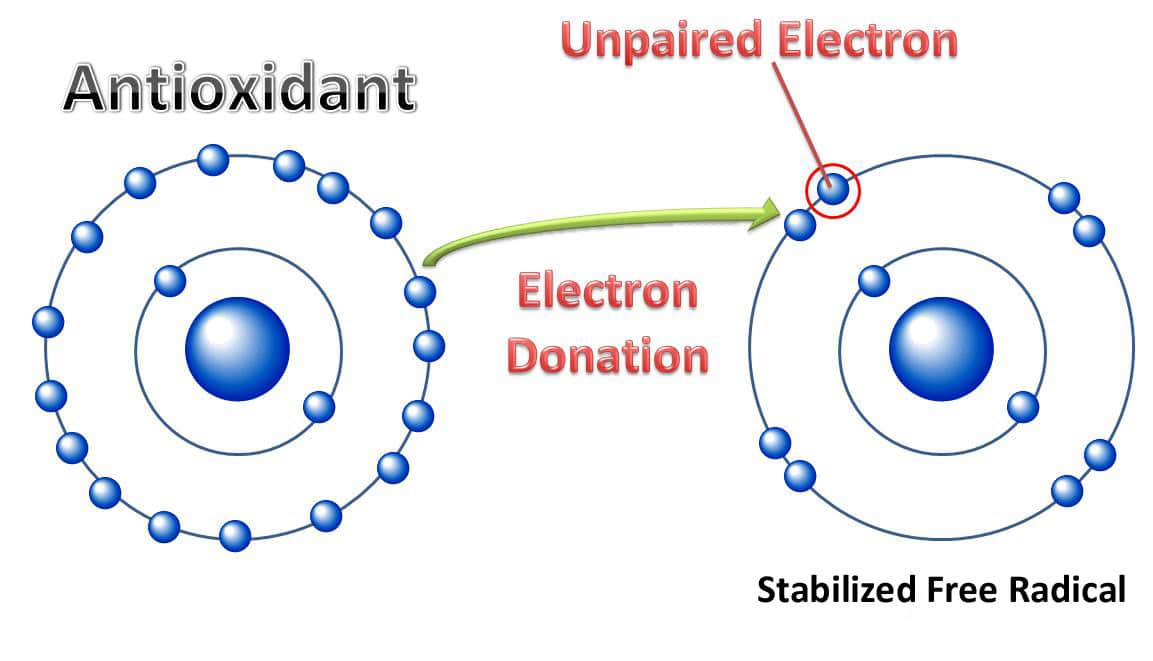 All living organisms have an innate, complex antioxidant system designed to protect against free radical attacks. The antioxidant system is present soon after birth and strengthens until an animal reaches maturity. For man, this has been determined to be around 20 years of age. For the dog and cat, this would be closer to 1 year of age.

The antioxidant system of the dog and cat is a complex system comprised of the following:

Different antioxidants protect different parts of a cell. Vitamin C is water soluble and protects against free radicals in the blood and fluids that bathe the cells. Vitamin E is fat soluble like the carotenoids and co-enzyme Q10. They protect the fatty structures such as cholesterol in the blood and cell membranes. Vitamin E needs Vitamin C in a specific ratio in order to be effective. Beta carotene protects mitochondrial walls while co-enzyme Q10 works inside the mitochondria. Antioxidant enzymes neutralize free radicals almost everywhere in the body. They rely on the presence of various trace elements like copper, zinc, manganese and selenium to be effective.

Antioxidants are unique in that when they donate an electron to neutralize a free radical, they themselves, do not become free radicals. This is a one-time process for the antioxidant unless they can be recharged by receiving another electron from an electron donor.

Lately, the emphasis on optimal compared to maintenance nutrition has been most pronounced in the area of nutrients capable of reducing oxidative stress. Studies have shown that the antioxidant vitamins and minerals may be necessary at levels much higher than normally recommended.

The vast collection of scientific studies strongly supports the Free Radical Theory of Aging and suggests that underfeeding reduces the number of reactive oxygen molecules and enhances the mechanisms that protect cells from their damaging action. Thus, feeding smaller quantities of food rich in antioxidants could go a long way towards extending a pet’s life and improving overall pet health.

The Phase II response is an evolutionarily conserved adaptation that can be triggered by a wide variety of stressors. In other words, the animal body has a mechanism for revving up the antioxidant system if needed. When the Phase II Response is triggered it can affect some 230 survival genes largely responsible for the synthesis, use and recycling of cellular antioxidants and reducing agents. 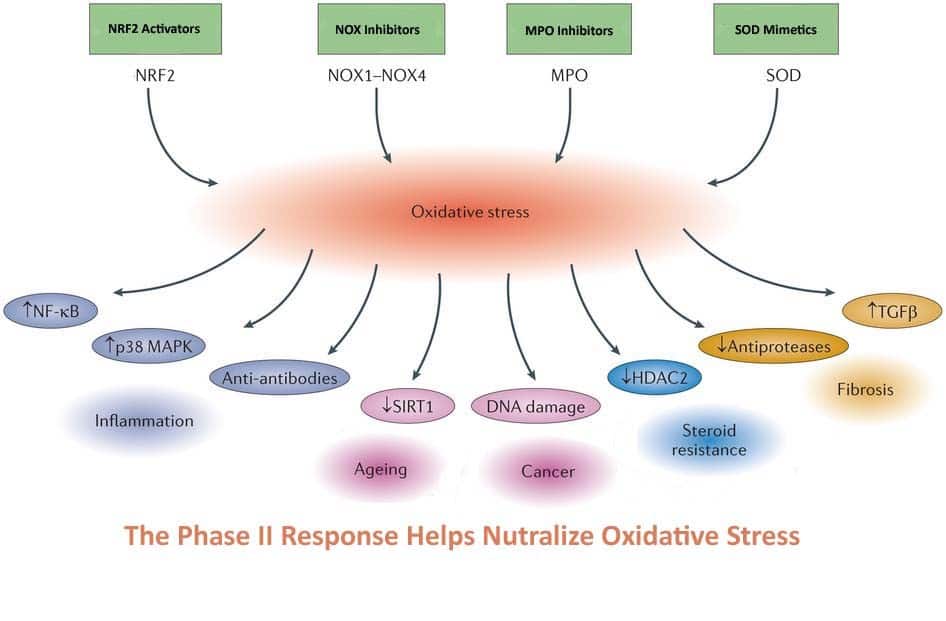 The induction of the Phase II response is predominantly facilitated by the transcription factor Nrf2. The majority of genes induced by Nrf2 are the glutathione synthesis genes, glutathione reductase, glutathione transferases and glutathione peroxidases, all of which play an important role in Canine & Feline stress resistance and cellular protection. Nrf2 also can inhibit 30 to 40 genes that are associated with many diseases including the age-related diseases such as diabetes and cancer.

Nrf2 is a powerful protein that is latent within each cell of the body, unable to move or operate until it is released by an Nrf2 activator. Once released it migrates into the cell nucleus and bonds to the DNA at the location of the Antioxidant Response Element (ARE) which is the master regulator of the entire antioxidant system. Nrf2 activation is available in ALL animal cells.

Lately, science has shown that a variety of foods are potentially powerful activators of the Nrf2 pathway. While not necessarily rich in antioxidants themselves, they directly affect a dog or cat’s innate ability to produce vast numbers of antioxidants. In this way, specific molecules from Nrf2 activating foods can trigger the production of millions of additional antioxidant molecules, providing far better protection against the accumulating effects of oxidative stress.

It would appear that the best way to reduce free radicals and the effects of oxidative stress would be to provide our pets with a balanced lifestyle as free as possible from toxins, pollutants, and disease-causing organisms, free of physical and emotional stressors, and to feed reduced portions of a high quality, biologically appropriate diet. In order to support the natural defense systems, I highly recommend supplementing the daily diet with antioxidant vitamins and minerals, specific antioxidants plus Nrf2 activating nutrients. Preventing excessive oxidative stress may be the most important thing you can do for the overall health of your dog or cat.

Get proactive with your Pet’s Health. Check out our products for Eye, Heart and Immune Support.