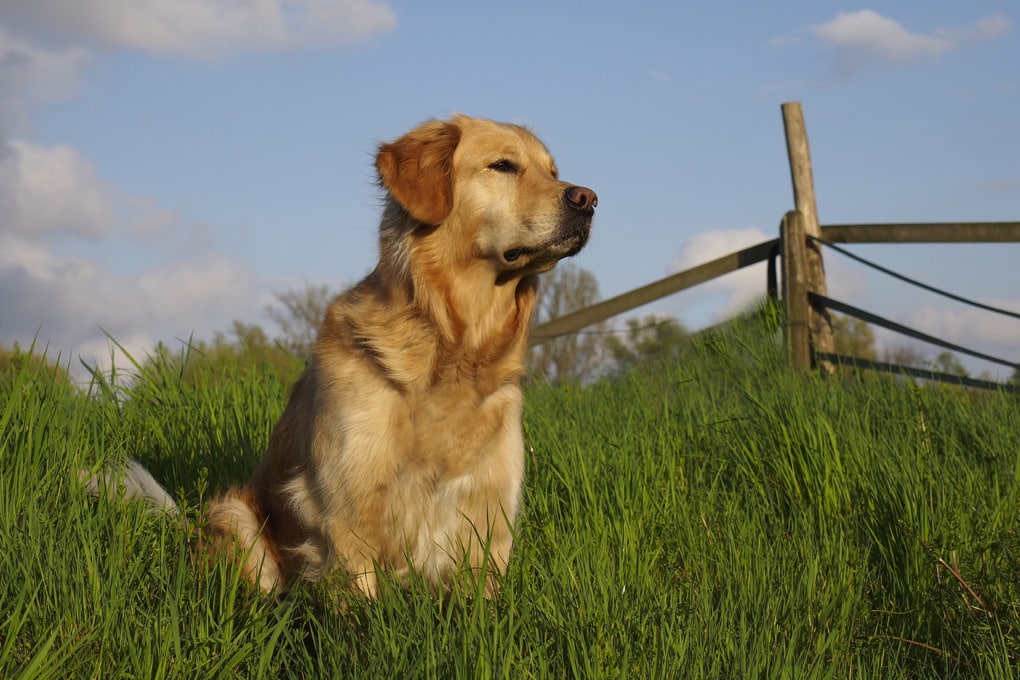 History of the Golden Retriever

According to records, the Golden Retriever was first bred around 1890 in Inverness-Shire, Scotland by Dudley Marjoribanks – Lord Tweedmouth.  Who could have known that crossing the Flat-Coated Retriever with Tweed Water Spaniels, Blood Hounds, and Irish Setters would turn into one of today’s most popular and revered breeds?

Not only is the Golden Retriever one of the best family pets, they are noted for their obedience, and as a service dog for the blind or disabled.  Its unbelievable nose has also made it a useful hunting dog that takes to both water and brush, or for tracking and sniffing out narcotics.

Golden Retrievers are also one of the most popular show breeds, getting their start in 1908 at the Crystal Palace Dog Show in England.  The American Kennel Club recognized the Golden as an official breed in 1925.  In spite of its beauty, popularity, and being a perennial fan favorite, the Golden has never won “Best in Show” at the Westminster Dog Show.

When it comes to obedience competition, the Golden is one of the best.  They were the first three dogs of any breed to become AKC Obedience Champions.  True story; years ago, I was able to do minor surgery on the eyelid of a golden in the presence of its owner who did not want to risk anesthesia.  The dog was told to sit and stay and it obeyed without hesitation throughout the procedure.

It is not surprising that Golden Retrievers are one of the most popular dog breeds in the United States. Along with being exuberant, friendly, and downright silly at times, they are strong dogs and hard workers.  They have been regular additions to numerous commercials, sitcoms like “Full House” and movies like “Air Bud”.

The Golden Retriever is a symmetrical, powerful, active dog, that is well put together, not clumsy nor long in the leg, displaying a kindly expression and possessing a personality that is eager, alert and self-confident. Males are 23 to 24 inches in height at withers; females 21½ to 22½ inches. Male dogs weigh 65 to 75 pounds, while bitches range from 55 to 65 pounds.  Hair Coat colors come in variations of almost white to cream or a rich golden.

Golden Retrievers can adapt to virtually any living situation. Coming from a hunting and retrieving origin, they still need considerable daily exercise to maintain physical and mental fitness.

Golden puppies may very well be the cutest of all dogs. Proper socialization and training should take place between the ages of 6 and 14 months, should you desire a well-rounded adult that spends every waking minute trying to please its owners. When socialization, training, or daily exercise is left out of the equation, the Golden Retriever can become a bit high-strung and destructive. Owners must be a consistent pack leader in order to eliminate behavioral problems.

Golden Retrievers love the water. My first Golden, Zac, owned our pool to the extent that our other dogs were not allowed in it under any circumstance. Should they attempt to go for a swim he would dunk their heads until they decided that dry land would be better than getting water up their noses and would retreat to safety. Zac’s self-taught swimming talents included a corkscrew dive and exhaling to the point that he could walk on the bottom of our 12-foot deep pool, with eyes open looking for anything we had thrown in for him to retrieve!

Being prone to obesity, consistent monitoring of their weight will go a long way towards eliminating hip and joint problems.  Being such a popular dog, the practice of overbreeding has led to a high incidence of hip dysplasia.  Reputable breeders will have their dogs OFA-Certified free of hip problems.  My advice would be to pay more and purchase from known breeders that provide guarantees.  Other medical problems you should be aware of include cancer, mast cell tumors, Von Willebrand’s disease, heart problems and congenital eye defects. Skin allergies are also common in Golden Retrievers and often require veterinary intervention.

The Golden Retriever has a long double coat that will keep it warm in cold climates, and even freezing cold water.  Consistent brushing will keep it in good condition, especially during the summer when the dense undercoat is shed.  They are a hearty breed, but like most of our dogs, their life span is quite short.  The Golden Retriever can be expected to live an average of 10-14 years.  Read about increasing the lifespan of a dog to get a better understanding of what can improve your Golden’s life expectancy.