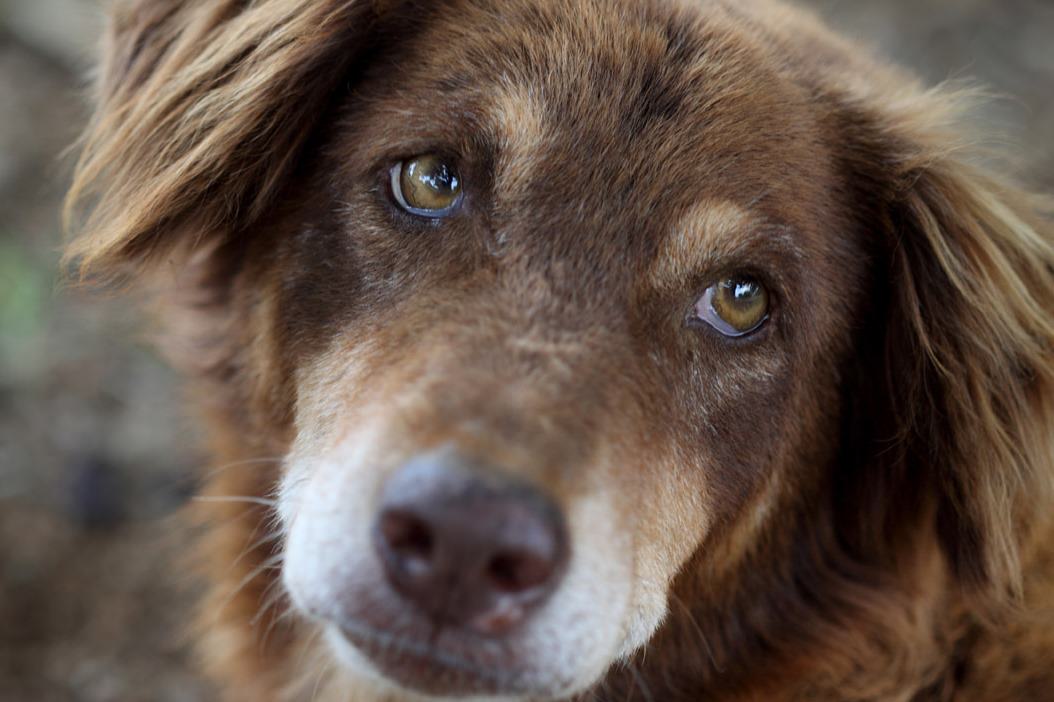 Neurological disorders in dogs fall into three main categories: Encephalitis (inflammation or infection in the brain), Cerebral Degeneration (where the cells of the dog’s brain die), and Brain Tumors (a mass growing within the dog’s brain). Brain tumors can affect young dogs, but are more commonly seen in older dogs, likely due to a diminished immune system. 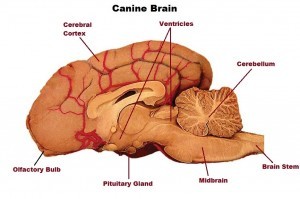 Infection and inflammation of the central nervous system (CNS) is referred to as Encephalitis. The CNS consists of the brain, spinal cord, and meninges (the tough fibrous membrane that surrounds the brain and spinal cord). Bacteria, viruses, parasites, fungi and tick-borne diseases are the primary causes of encephalitis. Bacterial encephalitis is caused by organisms that enter the brain through the circulatory system resulting from a sinus infection, deep inner ear infection, or abscess in the head. Meningitis is a bacterial infection on the surface membrane of the brain and spinal canal caused by infected bite wounds around the head and neck as well as bacterial infections that travel to the brain from the sinuses or ears. 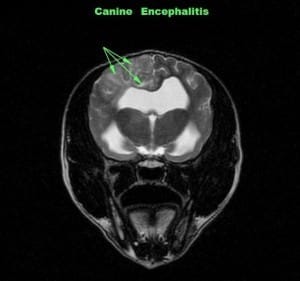 Idiopathic Encephalitis
Idiopathic encephalitis is a general term used for cases in which an infectious cause or other direct cause cannot be found. In many cases, an underlying immune-medicated cause is suspected because these animals improve after suppression of the immune system. Immune-mediated diseases occur when the body’s white blood cells mistakenly attack normal tissue, in this case the brain or spinal cord. High-dose therapy with the prednisone steroid is the most common treatment.

Granulomatous Meningoencephalitis (GME)
This common inflammatory brain disease is usually seen in female dogs of small breeds, especially Terriors, Dachshunds, and Poodles. Although GME can occur at any age, dogs 3-6 years of age are most at risk. It is typically characterized by fever, depressions, uncoordinated gait, behavior changes (particularly aggression), and seizures.

Necrotizing Meningoencephalitis (NME)
This inflammatory brain disease affects the forebrain predominately and is characterized by seizures. Young dogs 6 months – 7 years of age are affected. Breeds that are commonly predisposed to this disease include Pugs, Maltese, Chihuahuas, Papillion, Shih-tz, and Boston Terriors.

Necrotizing Leukoencephalitis (NLE)
This is a multifocal, localized, chronic progressive disease of the forebrain and brainstem with the central vestibular disease being common. It primarily affects Yorkshire Terrior, Chihuahua, and Shih-tzu dogs within the first 10 years of their life.

Clinical signs of encephalitis reflect the area of the brain that is affected. Most animals will develop neurologic abnormalities over a short period of time (days to weeks).
Forebrain (cerebral) disease:

The diagnosis of encephalitis or meningitis is usually based on analysis of cerebrospinal fluid obtained by a spinal tap collected at the base of the skull. A significant increase in white blood cells in the spinal fluid indicates encephalitis. The brain may be imaged with an MRI or CT scan before a spinal tap to look for signs of elevated intracranial pressure and to rule out other causes of neurological disease.

Once an animal has been diagnosed, antibiotics are usually started to treat for the common infectious diseases. If the animal has seizures, anticonvulsants like phenobarbital are started. Low doses of steroids may be used if there is significant inflammation in the spine. Dogs who recover from encephalitis may develop seizure disorders and other neurological symptoms and will require continuous treatment.
In severe cases of recurrent encephalitis, more potent immunosuppressive medications are used along with prednisone. Most of these medications are types of chemotherapy and require periodic blood tests to avoid toxicity. 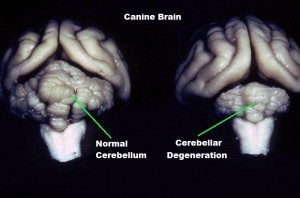 An MRI may reveal a smaller than normal cerebellum but a biopsy is the most definitive means of diagnosis. Routine blood and urine testing may be necessary to rule out other disease conditions which may appear similar.

There is no curative treatment, the medications such as Amantidine, Buspirone, Co-enzyme Q10, and Acetyl-L-Carnitine have shown some promise. This type of brain disease in dogs can lead to poor coordination and decision making by the dog. Restrict the dog’s activity to safe areas of the household to avoid stairs, sharp objects, and swimming pools. With loss of coordination, dogs with cerebellar degeneration may require physical aid in eating.