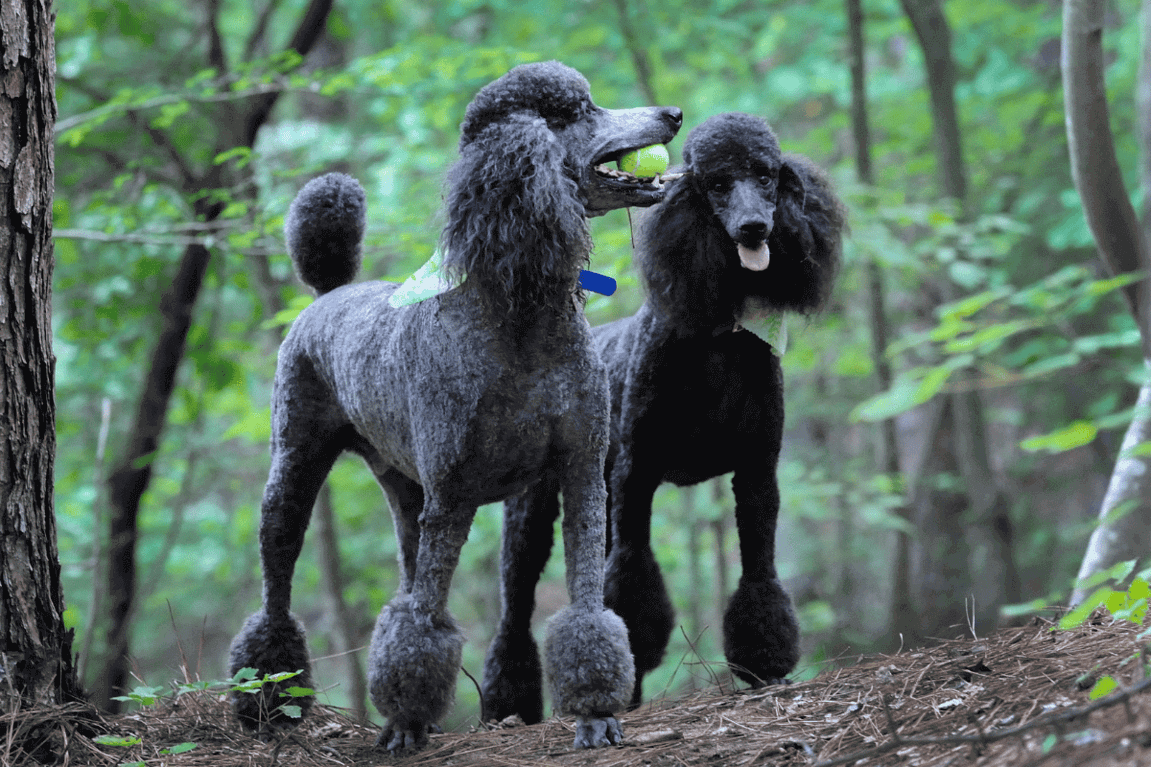 Most historians agree that the Poodle originated in Germany as a duck hunter dog in the 15th century. A breed often referred to as the Caniche, meaning “duck dog”, these canines later evolved into its own distinct breed in France. From here, the Standard Poodle began its development as a retrieving water dog in the 1600’s. Due to their showy looks and trainability, Poodles were found favorable among the nobles of France and, eventually, all of Europe.

Soon-after, in the 1600s, breeders began producing smaller versions of the Poodle, appropriately titled the Miniature Poodle and the Toy Poodle. The French used the larger Standard Poodle for duck hunting and retrieving, the Miniature Poodles job was to sniff out truffles in the woods, and the Toy Poodles job was to serve as a companion to the wealthy merchant class.

The Kennel Club in England registered their first Poodle in 1874. While it’s not known exactly when Poodles arrived in America, the American Kennel Club registered their first Poodle in 1886. Poodles were considered rare in the U.S. all the way up to World War 2, although, by the mid-1950’s, Poodles quickly became one of the most popular dog breeds in the country and has remained so to this day.

Poodles are widely regarded as one of the most intelligent canine breeds in the world. They’re highly trainable and ready to accomplish nearly any task you assign to them. If a Poodle gets bored due to not being mentally or physically stimulated, they can quickly become destructive. However, if an owner keeps their Poodle regularly active, they will remain a loving, loyal, trainable, and smart family companion.

In addition to their eagerness to please people, Poodles have a goofy streak and absolutely love to play. The Poodle is highly protective of their family, meaning that they’ll definitely sound warning barks if a stranger approaches your house. While these dogs are affectionate with their family, they may take a while to warm up to new people.

Make no mistake that Poodles are high maintenance dogs, grooming is a significant consideration when it comes to caring for a Poodle. It’s important to brush these breeds daily to keep their coats from matting. While some owners learn how to trim their dogs’ coats themselves, most Poodles are brought into a professional dog groomer every four-to-six weeks for a bath, groom, and nail trim.

One of the big upsides, the Poodle is a non-shedding breed which makes them an excellent choice for people with allergies. Though, many poodles have weepy eyes that stain the hair under their eyes, wipe around your Poodle’s eyes and face regularly with an alcohol-free pet wipe or washcloth to avoid visible tear stains. Some Poodles have drop-down ears that are prone to infections, wipe the ears out weekly with a cotton ball happened with PH-balanced ear cleaner to prevent problems.

Poodles are generally considered healthy and live long, happy lives. There are certain health conditions that they’re more prone to suffering compared to other dog breeds. Addison’s disease, also known as Hypoadrenocorticism, is a serious condition caused by an insufficient production of hormones by the adrenal gland. Fortunately, this disease can be fixed with medication, early signs to look out for include poor appetite, vomiting, and lethargy.

Other common health problems of the Poodle include: