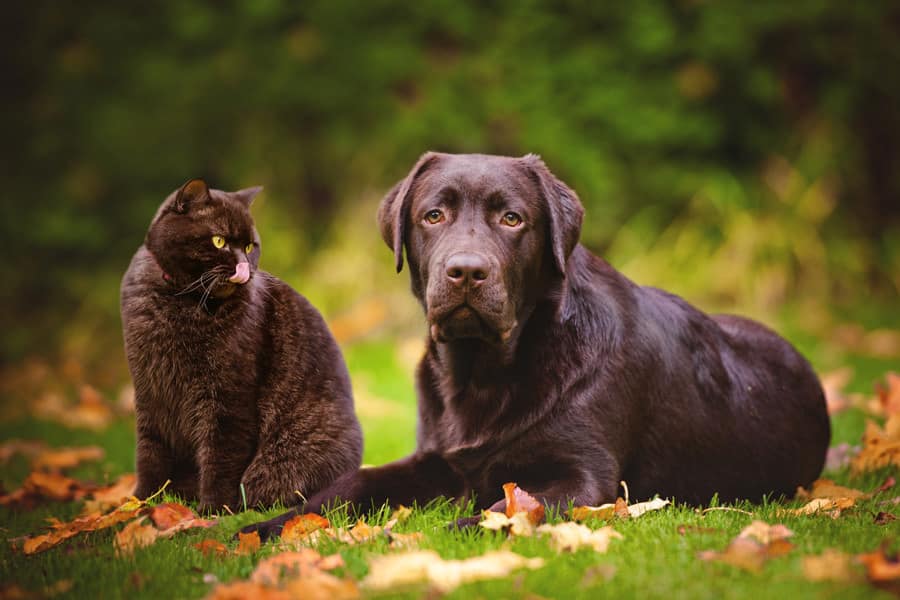 There are three primary classifications of animals: Carnivores, Omnivores & Herbivores

Carnivores are animals that eat the flesh of other animals. 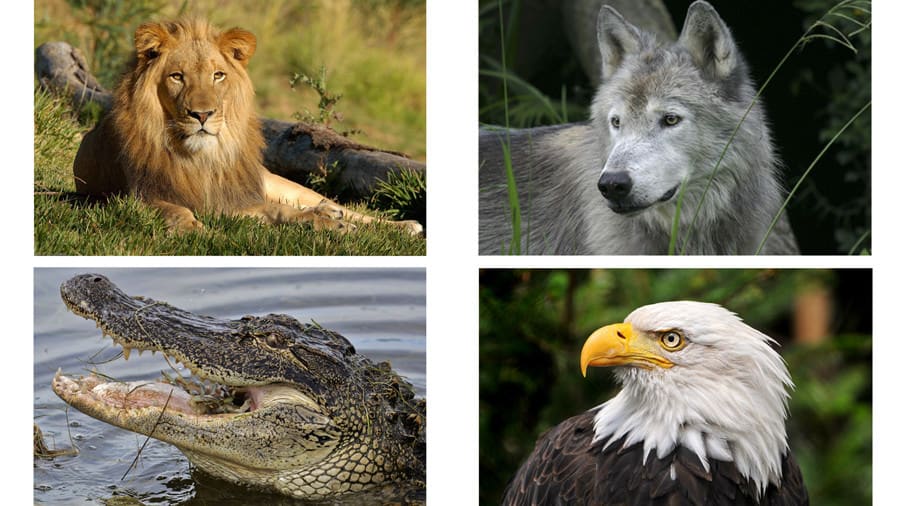 The carnivore’s digestion system is unable to break down the cell walls of plant vegetation.

Omnivores are animals that have adapted to eating both plants and animals. 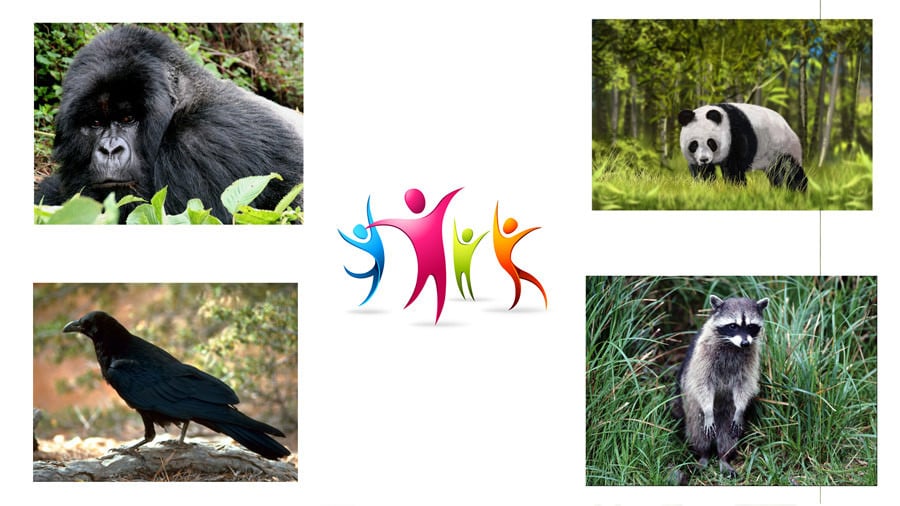 Herbivores are animals that only eat vegetation. They are able to digest and use the cellulose that forms the cell walls of plants. 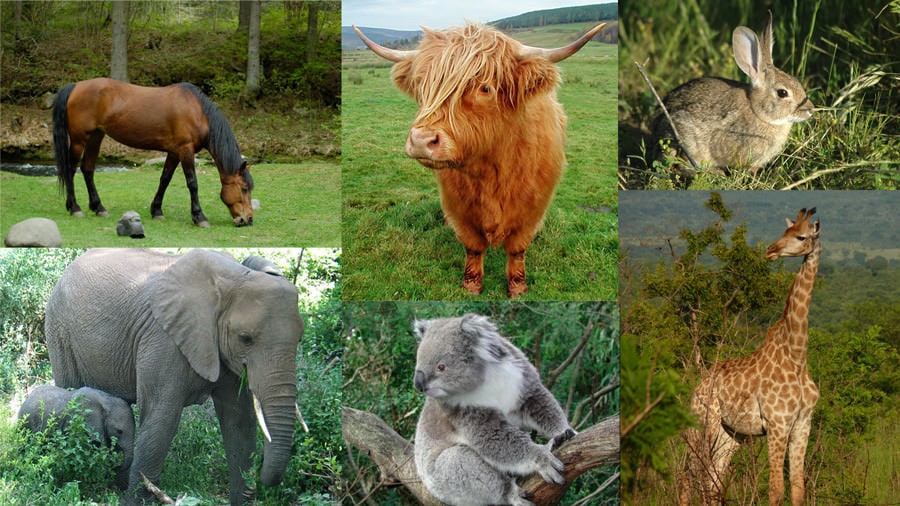 Which of these classifications do our dogs and cats belong to?

I often hear pet owners, pet food manufacturers and even veterinarians describe modern day canines as omnivores based solely on their being fed a diet consisting of both plant and animal matter. Few stop to think that today’s domesticated dogs consume what we have decided is best for them rather than using a more objective approach such as looking at the diet of their ancestors or considering their digestive anatomy and physiology in order to identify which nutritional ingredients are the most biologically appropriate rather than the cheapest, most abundant or convenient to feed.

An animals digestive anatomy and physiology slowly develops over time based on the foods they naturally consume.  For example, Carnivores have become efficient consumers of other animals.  Adapting to significant dietary changes can take a very long time and can lead to disease, death and the extinction of species.  Imagine what would happen to any carnivore species if suddenly all they had to eat was a herbivore diet of grass and hay.  How long would they survive?

Science tells us that our dogs and cats evolved as carnivores and that anatomically and physiologically they are still the same today.  Here is the scientific breakdown of the entire digestive system of the dog and cat.

The first thing to note about the digestive system of all carnivores is that they are similar anatomically and the simplest of all other animal species.  Because carnivorous animals come in many different sizes, the total length of their digestive tracts do vary.  Generally speaking however, the overall length is considered to be rather short averaging only about six times that of their total body length, much shorter than omnivores or herbivores. 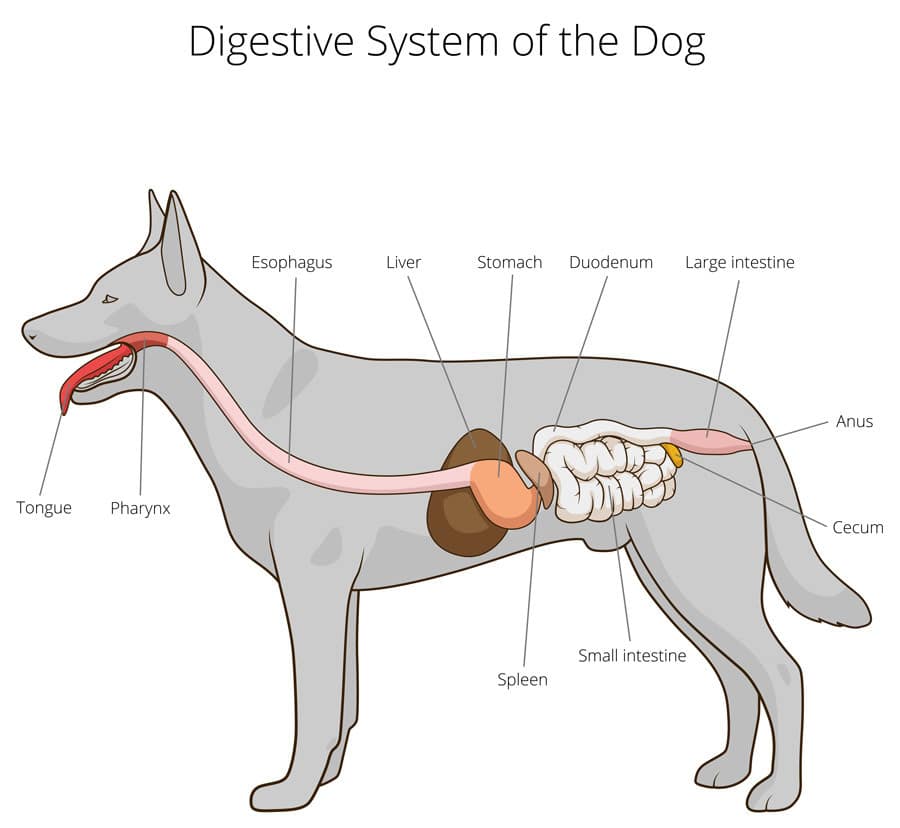 The Oral Cavity
Carnivores have a wide mouth opening in relation to their head size. This provides obvious advantages in developing the forces used in seizing, killing and dismembering prey. Facial musculature is reduced since these muscles would hinder a wide gape, and play no part in the animal’s preparation of food for swallowing. In all mammalian carnivores, the jaw joint is a simple hinge joint lying in the same plane as the teeth. This type of joint is extremely stable and acts as the pivot point for the “lever arms” formed by the upper and lower jaws.

The primary muscle used for operating the jaw in carnivores is the temporalis muscle. This muscle is so massive in carnivores that it accounts for most of the bulk of the sides of the head. The “angle” of the mandible (lower jaw) in carnivores is small. This is because the muscles (masseter and pterygoids) that attach there are of minor importance in these animals. The lower jaw of carnivores cannot move forward, and has very limited side-to-side motion. When the jaw of a carnivore closes, the blade-shaped cheek molars slide past each other to give a slicing motion that is very effective for shearing meat off bone. 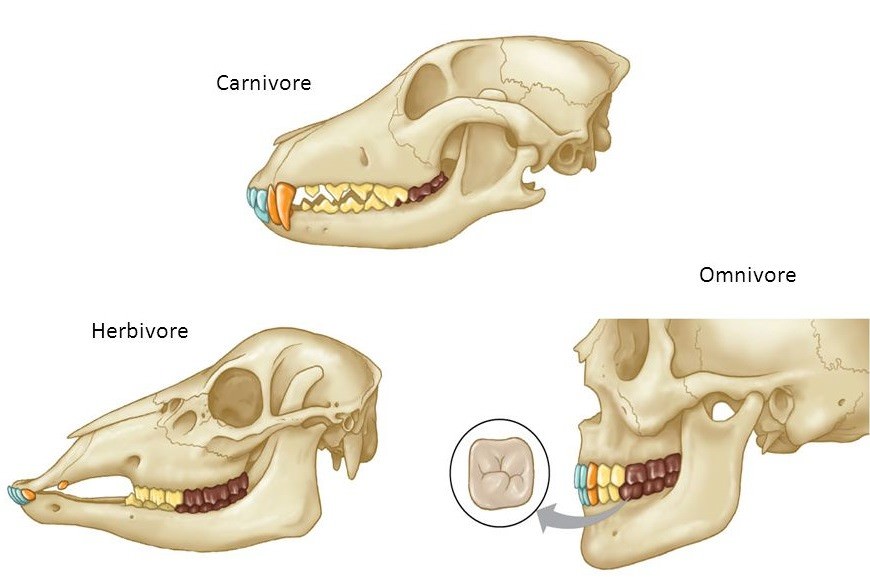 The teeth of a carnivore are discretely spaced so as not to trap stringy debris. The incisors are short, pointed and prong-like and are used for grasping and shredding. The canines are greatly elongated and dagger-like for stabbing, tearing and killing prey. The molars (carnassial) are flattened and triangular with jagged edges such that they function like serrated-edged blades. Because of the hinge-type joint, when a carnivore closes its jaw, the cheek teeth come together in a back-to-front fashion giving a smooth cutting motion like the blades on a pair of shears.

When eating, a carnivore gorges itself rapidly and does not chew its food. Since proteolytic (protein-digesting) enzymes cannot be liberated in the mouth due to the danger of auto digestion (damaging the oral cavity), carnivores do not need to mix their food with saliva; they simply bite off huge chunks of meat and swallow them whole.

The Stomach
Carnivores have a simple (single-chambered) stomach. The stomach volume of a carnivore represents 60-70% of the total capacity of the digestive system. Since these animals average a kill only about once a week, a large stomach volume is advantageous because it allows the animals to quickly gorge themselves when eating, taking in as much meat as possible at one time which can then be digested later while resting.

Additionally, the ability of the carnivore stomach to secrete hydrochloric acid is exceptional. Carnivores are able to keep their gastric ph. down around 1-2 (similar to industrial strength hydrochloric acid) even with food present. This is necessary to facilitate protein breakdown and to kill the abundant dangerous bacteria often found in decaying flesh foods. Dogs hold chewed food in their stomachs for 4 to 8 hours after ingestion. Only a little food at a time is released into the intestine, which it passes through quickly. This gives any bacteria that may live through the repeated acid baths little time to colonize and produce gastrointestinal distress.

After a few inches, two ducts connect from the pancreas and the liver to the small intestine. These two organs supply and deliver the enzymes needed to break down the fats and proteins into their component fatty acids and amino acids. Only in this form can they pass through the gut wall into the bloodstream. These enzymes are vitally important to the carnivore. Those from the pancreas immediately start to break down the chyme into its basic components and continue to do this throughout its passage along the small intestine.

The chyme is a watery mixture but fat will not mix with water so it requires some special handling. This is where bile comes in. Bile is manufactured in the liver and stored in the gall bladder until such time as it is needed. When fat is detected in the small intestine, this triggers the release of the stored bile, which enters the intestine through the bile duct. Bile acts just like a detergent in that it emulsifies the fat to make it soluble in water. This action makes fat susceptible to digestion by the digestive enzymes.

In the carnivore there are large amounts of fat in diet on occasion and, as bile is so important, its waste is not allowed. The liver makes bile continuously, the excess being diverted to the gall bladder to be saved and concentrated until it is needed (for the next meal). When a hormone in the upper gut signals that fat is again present in the gut, the stored bile is forcibly ejected to perform its function.

Digestion of food in a carnivore is performed by enzymes produced by glands in the animal’s own body and all the absorption of nutrients in that food is through the wall of the small intestine. This is an important consideration when we compare it later to the digestion of a herbivore.

The digestion of protein and fat, with little or no carbohydrate, in the carnivore’s gut is remarkably efficient. Experiments which have measured the amounts of various nutrients eaten and compared these with the amounts passed in the animal’s excreta have shown that a healthy animal loses no more than four percent of its fat intake and only a trace of the protein.

As there is no enzyme in the carnivore capable of digesting cellulose little or no digestion of carbohydrates can take place.

The Large Intestine
The large intestine (colon) of carnivores is simple and very short, as its only purpose  is to absorb salt and water and allow stool matter to form. It is approximately the same diameter as the small intestine and, consequently, has a limited capacity to function as a reservoir. The colon is short and non-pouched. The muscle is distributed throughout the wall, giving the colon a smooth cylindrical appearance.

The Carnivore Gut Flora
Practically the whole of the gastrointestinal tract of a carnivore is sterile. The hydrochloric acid in the stomach ensures that most bacteria and other micro-organisms in swallowed food are killed. Those that escape the stomach are rarely able to survive the digestive processes – they are, after all, made of protein.

The colon is the exception. This, where no further digestive processes occur, does tend to harbor a variety of organisms which form certain vitamins such as pyridoxine, vitamin B-12, biotin, vitamin K and folic acid but, as these are not absorbed through the wall of the colon, they are of little account. These micro-organisms thrive in an alkaline environment and are of the putrefactive type.

There is no doubt that all cats are considered strict carnivores (meat eaters). By examining their digestive anatomy and physiology and observing their feeding behavior, one can only conclude that they are true carnivores all the way.

Anatomically and physiologically dogs are also carnivores. Is it incorrect to label dogs as a quasi-omnivores just because they can be seen eating a few berries in the wild or because they readily consume commercially prepared diets containing large amounts of carbohydrate.  After all they eat what we feed them which may not be what they would naturally choose for themselves.

Their anatomy and physiology correctly tells the story.  Their teeth,  jaw structure, large stomach, relatively short and simple small intestine and a very short large intestine identifies them as a carnivore. Feeding this system incorrectly does not alter its biological makeup or the need for specific nutrients capable of creating optimum fitness and health.

It is also true that the dog and cat are both adaptable creatures and will not voluntarily starve themselves when fresh meat is not available. This means that if you feed them carbohydrate for economic reasons they will eat it and most likely survive with the minimal amount of protein they get from it. But do they actually thrive (live long and healthy lives) consuming a biologically incorrect diet?  Pet food manufacturers claim all kinds of success in their advertisements; however, they do not factor in all of the medical problems or the potential loss of life years associated with feeding a biologically incorrect diet.

It should be noted that all wild dogs and cats – including today’s domesticated species – are carnivores and they cannot optimally survive without ingesting nutrients derived from other animals.

NEITHER THE DOG NOR CAT SHOULD BE FED AN EXCLUSIVELY VEGETARIAN RATION. 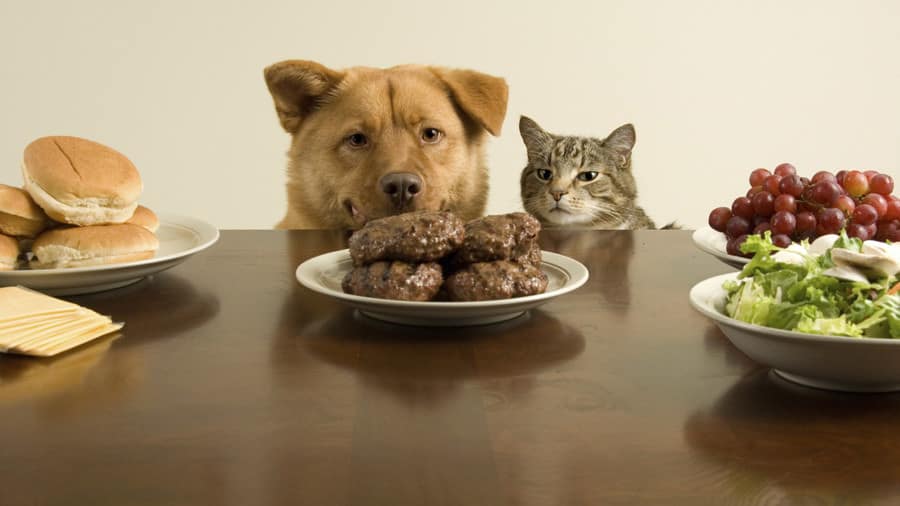